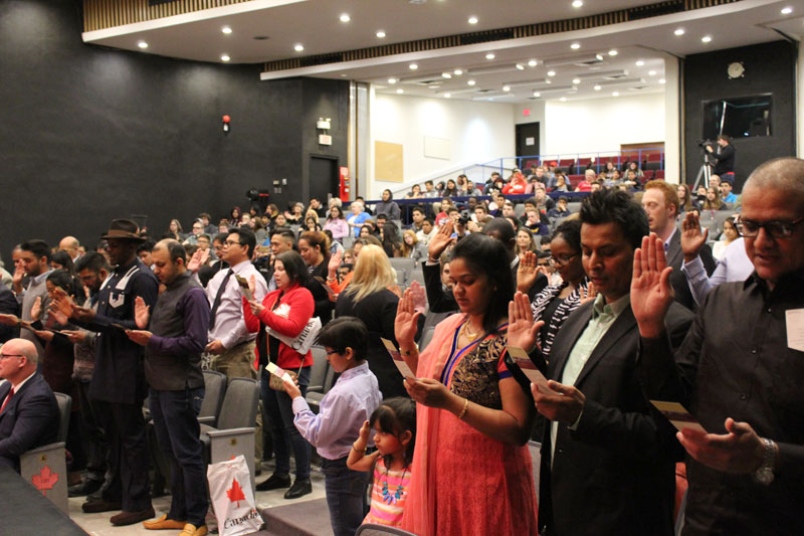 A true(r) picture of immigrant life

A recent opinion piece from the CBC – ‘The dangers of self-ghettoization in Calgary’ left me – (and undoubtedly many others) perturbed. The article (https://www.cbc.ca/news/canada/calgary/self-ghettoization-calgary-israr-kasana-road-ahead-1.4864998), written by well-respected journalist Israr Kasana, eloquently and potently argued against the congregation of faith and culturally based groups in specific neighborhoods.

Israr’s viewpoint undoubtedly contains many difficult truths – ones every community in Alberta – immigrant or not – face. Our collective faith, culture and value systems in Canada are undoubtedly major drivers of our choices and communities to reside in, a ‘self-imposed’ stand to counter the pressures of assimilation and homogenization of North American life. Our First Nations communities face it – and have suffered immensely as a result; our Catholic communities face it – a flight from religion in an increasingly secular world and prompted by the grievous wrongs of certain clergy members worldwide; our farming community faces it – the slow departure of sons and daughters seeking a comfortable life in the big city rather than the discipline and wear of working the land. And yes – our newly-arrived immigrant population faces it too.

Most people prefer to surround themselves with other like-minded, similar looking, similar-thinking people. The President of the United States owes his office because of it. Consciously or unconsciously, rightly or wrongly (but really, wrongly) the general public largely encourages it, desire it, entrenches it. Rich people live with other rich people, first-time homebuyers live with other first-time homebuyers, renters live with renters, the poor live with other poor people. As such, the ‘proper place’ that our working poor and newly arrived immigrants ‘should’ live – and do live – are far more indicative of a housing affordability gap and of the challenge of adjustment to new cultures than an malicious intent to isolate themselves from the wider Canadian community. We prefer to live next to our mosques, churches, synagogues, temples, gurdwaras, favorite coffee shops, and transit locations, but decision-making first and foremost is where families can receive the most support within their budget. We cannot – and should not – be ashamed that.

I accept that I may miss some of the context that Mr. Kasana has. I have been extremely fortunate, undoubtedly. My parents immigrated to Canada in the early 1980s, penniless but ambitious like so many immigrants are but I never knew that struggle. I won the childbirth lottery to be born in this country, a proud son of Red Deer, Alberta. I am a Shia Ismaili Muslim – our community has extensive support networks to assist our newly arriving congregation. And, as a volunteer within our Ismaili community institutions, I’ve had the privilege of working with many Canadian immigrants as they try to adjust to this foreign life in the frigid cold.

Life is difficult for our future Canadian citizens. It’s confusing. It’s frustrating. It’s overwhelming. No doubt these families want to be surrounded by others to help make a transition to a new life. English can’t be learned overnight. Budgeting, credit and banking likewise. It takes years to be able to follow the puck in a hockey game – my first generation Canadian wife still cannot. How can we reasonably expect these new residents to integrate – even superficially – when the minimum cultural adjustment required takes years to achieve? I applaud the bravery of our immigrant professionals who sacrifice vibrant careers to be turned down for job after job due to a lack of ‘Canadian experience’. I feel for the blue-collar individuals who arrive on these shores, facing a need to support their families without a strong command of the local language. As Canadians we all should. I don’t begrudge them choosing a home or community more familiar to begin their lives in Canada in.

In an ideal world, we would not have ‘self-imposed ethnic enclaves’, absolutely. People would settle quickly, adjust to their new cultures without yearning of their families left behind and bravely move to other ‘mainstream’ communities. We would have an affordable and transitional housing scheme in every neighborhood, ESL classes at every community league, and free hockey equipment for any child seeking to learn the game. True and supportive integration.

Unfortunately, we have what we have.

Speaking as an Edmontonian, the Edmonton Mennonite Centre for Newcomers, the Bredin Institute, Northern Alberta YMCA and Edmonton Food Bank admirably serve these vulnerable communities. I am certain that many other communities across Canada have similar outstanding institutions.

If we truly want to see better integration, let’s not blame those that have arrived in our cold, foreign lands for the first time. Let’s work towards a cohesive plan to integrate all Albertans into all communities. Let’s support the community institutions and their tireless volunteers that welcome our new neighbors, colleagues and friends. And, most importantly, let’s return the excited smiles and good hearts that our new immigrants and cultural communities bring to their jobs and neighborhoods every single day.

That is a ‘win-win’ situation for all.